"I love and value the people"

Admin
Sales Administrator - the perfect blend of right and left brain
Hunting a venturesome self-starter to support sales.
Leadership
Not Going For It Will Determine Your Future
You're a born closer and razor sharp with the numbers.
Design
Graphic Designers Looking for Creative License
Quick thinking and inquisitive by nature.
Sales
Madly Skilled Sales Pro looking to join your last Awesome Growing Company?
Apply your inherent skill as a natural persuader

Stay in the Know

Subscribe to be alerted of openings, new positions and opportunities with TheHomeMag

Thank you! Your email address has been noted!
Oops! Something went wrong while submitting the form. Please try again.

TheHomeMag is far more than a magazine.

To homeowners, we are consistent resource of talented local home improvement providers. To our advertisers, we are their dedicated marketing team with an incessant need to create new business for our clients. To each other, we are a common commitment of new business creation no matter our job titles. We do one big thing at TheHomeMag, although many of us hold various positions: we drive new business for every home improvement advertiser with tremendous care, consistency, and creativity.

If you'd like to join our tribe of magazines and you feel like you have the grit and determination to be awesome for us and our clients, then apply below. We are always in the market for tremendous leaders, sales mavericks, incredible designers, and supporting cast members to make this magic happen for our 6,000 clients and 8 million homeowners. 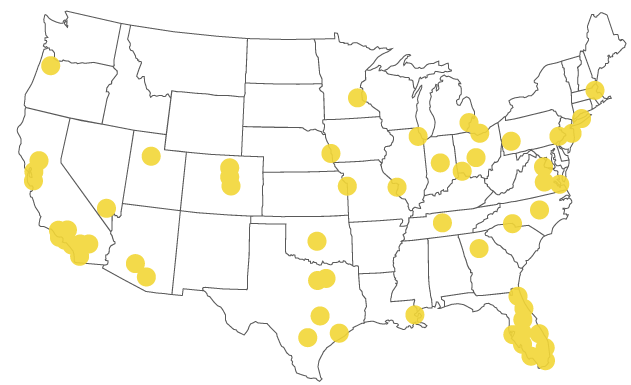 In 2002 TheHomeMag® was born. Our inaugural Issue, then titled The Home Improver, landed in the mailboxes of the top 100,000 homes in southwest Florida. After a couple of years, we launched the second magazine through our affiliate program in Ventura CA. Between 2004 and 2006, four more affiliate magazines launched in CA and FL.

Then something amazing happened – we started to franchise our business. In early 2007, we signed our first franchise in Las Vegas and that opened up the flood gates. Between 2007 and 2010, 18 more franchises joined our system. And then…the lights went out on our economy causing us to shift our focus to opening corporately owned and operated magazines. Between late 2010 and 2014, we spawned eleven more magazine locations, a mix of corporate and franchise owned books.

TheHomeMag magazine count at the end of 2014 was thirty-six magazine titles across fifteen states. Our monthly publishing and mailing count was 5.3M magazines with nearly 4,000 customers. Our early 2015 expansion included the birth of HomeIMPROVED®, a targeted mid-cycle magazine promoting our top 50 clients in a number of our markets. Additionally, we launched another 10 magazines that year bringing our title count to 46 locations in 21 states mailing 6.6M magazines monthly by the end of 2015. At present, TheHomeMag is just shy of 60 magazine locations in 27 states mailing 100M magazines annually plus another 40M Accessory cards and inserts.

The future is bright for sure. We have at least another 25 locations to add before we can even begin to think we’re at max capacity. Plus, we are always dreaming up more products and how to integrate these into our magazines, and in doing so we will never lose sight of our purpose of mailing to the best homes and bringing our advertisers more revenue every month. This is the magic of TheHomeMag®.